One skill when working in sport is learning to compromise between your clinical brain (the one that tells you that pathology and injury needs to be managed a certain way) and your performance brain (which tells you that your job is to get athletes back over the “white line” in order to do their job). In an ideal world, we try and appease both of these brains where tissues heal well and performance is optimised with the lowest risk of re-injury. But there are some pathologies that cause these two brains to clash. Ones that can be “managed” until the off season where proper interventions can take place. One such injury that I’ve been trying to learn more about is the mid-season hip labral tear. 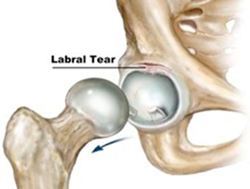 The purpose of these blogs is to encourage me to read more around certain topics, so in order to help with this I have to say thanks to a few people that have provided me with papers and words of wisdom (Erik Meira, Nigel Tilley & Joe Collins). And thanks to whoever invented Twitter because I probably wouldn’t have this access to knowledge otherwise.

Typically, hip instability injuries are seen in sports with high repetitions of rotational and axial load – football, gymnastics, hockey, tennis, martial arts.. and so on. The hip is widely accepted as being one of the most structurally stable joints in the body, with a deep acetabular socket lined by the labrum, which creates negative pressure within the joint to increase congruency of the femoral head. But what happens when this environment is disrupted? A recent review by Kalisvaart & Safran (here) explain that it takes 60% less force to distract the femoral head from the acetabulum in presence of a labral tear. (This review is great for explaining multiple causes of hip instability, not just labral tears, and also assessment techniques.)

Typically, a lack of stability is replaced by rigidity, where the surrounding soft tissues try to compensate for this increased translation (Shu & safran 2011 here and Boykin et al 2011 here). On assessment of an ongoing labral tear, its quite common to find increased tone or reduced range around adductors and hip flexors. Iliopsoas in particular plays a role to help increase congruency in the hip. (For tips on how to release iliopsoas, please tweet @Adammeakins) – one key thing when managing this condition is not to confuse high tone / over activity with being “too strong”. Chances are its the opposite, it more likely indicates a lack of control. Its not uncommon to see adductor tendinopathies secondary to labral tears as the the load around the joint increases – especially in sports like ice hockey where there is high eccentric load on the adductors (Delmore et al 2014 here).

So, you’ve diagnosed the tear (clinically and / or radiographically) but other than being irritable, it isn’t affecting the athlete. (Note, not all tears can be managed conservatively, due to pain & some require mid-season surgical intervention – Philippon et al 2010 here). The key premise to your ongoing rehab should be to make the hip joint as robust as possible. Remember, “Stability – not rigidity”. Whats the difference? Can the athlete control the hip or pelvis while performing another task? Or do they lock into a position and rely on passive structures like ligaments and joints.

Consider the demands of the sport. Don’t just fall into the trap of working through what I’d call the “action man ranges” – true anatomical flexion, extension, abduction and adduction. Watch training and competitions of nearly all sports and you’ll rarely see these truly sagittal or coronal movements. They tend to be combinations accompanied by transverse movements of the body in relation to the limb. Make sure this is replicated in your rehab. 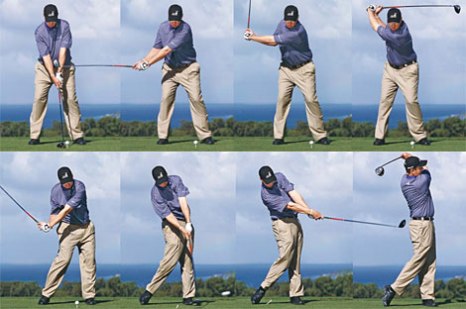 UNIONDALE, NY – MARCH 05: Nik Antropov #80 of the New York Rangers warms up before playing against the New York Islanders on March 5, 2009 at Nassau Coliseum in Uniondale, New York. (Photo by Jim McIsaac/Getty Images) 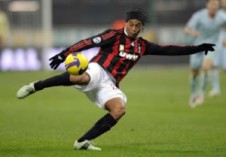 Using the three examples above, consider the role of the hip musculature throughout these movements. We don’t always have to replicate abduction in an open chain movement, sometimes its necessary for it to be closed chain and for the body to move relative to the limb. Note how none of these tasks fit the “action man ranges” but all involve some degree of traverse rotation, combined flexion and abduction or extension and adduction etc etc.

Delmore et al (here) and Serner et al 2013 (here) describe some excellent exercise interventions for the adductors here. These include some good low-load isometrics for those early stage reactive tendons – with isometrics appearing to down-regulate pain associated with this acute pathology (Koltyn et al 2007 here; Rio et al 2015 here to name just two resources) . Moving forward through rehab, I’ve discussed exercise progression at length before (here), I’m not dismissing exercises that involve pure flexion, extension etc but as part of a progression, its important to combine these movements. For example, start with a single leg dead lift – can the athlete control their trunk through hip flexion and through extension back to neutral? No? Then here’s a range to work on, using regressions to help improve technique and control. Yes? Then add a rotational component at different ranges of flexion – rotation away from the standing leg will increase the demand on the adductors to control the pelvis in outer ranges. The leg itself hasn’t abducted, but relative to the trunk it is hip abduction.

Its important not to just focus on the affected structures. For those interested in groin pain, a summary of the 1st world conference on groin pain is here – one key message from that conference was that anatomical attachments are not as discrete as text books make them. Consider what else contributes to the hip and pelvis control. We have mentioned iliopsoas control, but also rectus abdominus. Its not just a beach muscle. Eccentric sit ups can help improve control of the hip flexors, along with some lower load exercises like dead bug regressions – a little imagination or some quick youtube research can turn this one concept into hundreds of different exercises.

We have addressed the issue of controlling abduction through range with the adductors, but also remember to maintain that abduction-adduction ratio with some external rotator & abductor muscle exercises (queue Clam rant here – clams to me are like psoas release to Meakins). Possibly the best piece of advice I was given when doing this research was from Joe Collins, who told me to consider hip joint pathologies like you would a rotator cuff injury in the shoulder. Don’t neglect those smaller, intrinsic muscles around the hip. The exercise below is an anti-rotation exercise working through ranges of hip abduction-adduction. 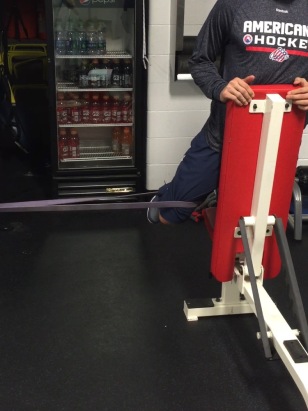 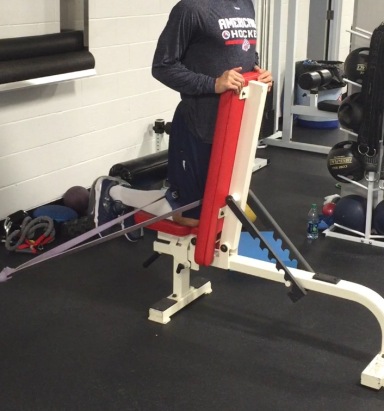 The athlete is tasked to resist the rotation of the femur into external rotation while slowly moving through hip abduction and back to adduction. (This example is done with a shorter lever to improve control and the bench provides feedback to keep the hips in neutral or extension, rather than the favored flexion). Anti-rotation exercises can also be incorporated into trunk / core control exercises (for any instagrammers – follow ETPI who post some great videos and snaps of golfers working on rotational control). Progress from anti-rotation into control through rotation. Some examples here: 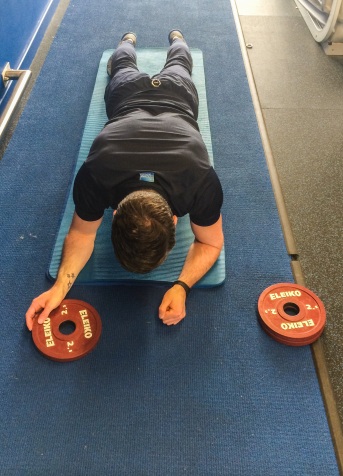 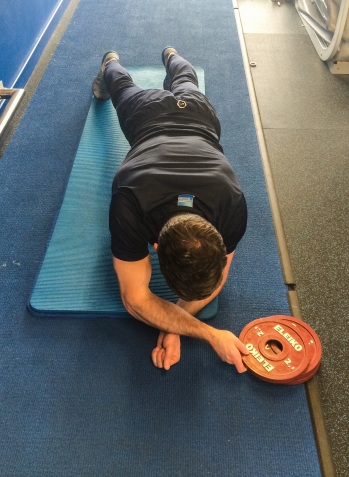 Anti-rotation plank with traverse control. Encourage the athlete to keep the pelvis still when moving the upper limb. 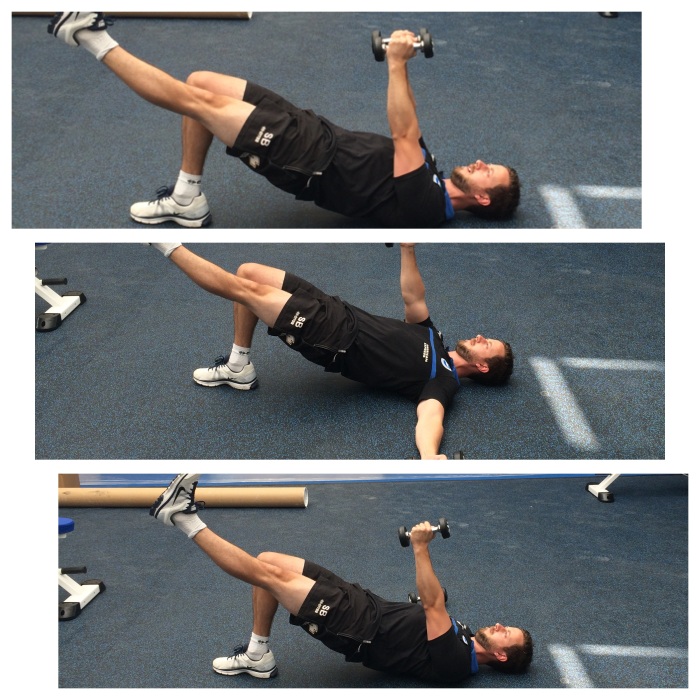 Single leg bridge with arm fall outs. Can be regressed to a normal bridge if the athlete lacks lumbo-pelvic control. 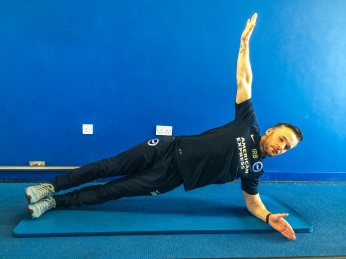 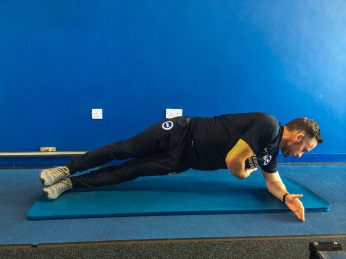 Side plank with arm tucks – an example of controlled trunk rotation while isolating the lower body to stay stable. Can be combined with the adductor bridge mentioned in Serners paper to increase load through proximal adductors.

These are just some ideas of how to manage a labral tear mid-season; working on rotational control, analgesia via isometrics, improving congruency in the hip joint and overall hip stability via strengthening – Stability, not rigidity! The exercises mentioned here are by no means an exclusive list and I love learning about new drills and ideas, so please share any that you find useful.

One thought on “Laboring through a Labral Tear”